The two wards in the present civil parish of Delamere and Oakmere occupy a special place in the ancient history of Cheshire, with two of the county’s seven prehistoric hillforts (Eddisbury Hill and the promontory fort on Oak Mere). Each of these defended settlements would have been the central hub for

agricultural life in the areas around them, serving as a secure location for the storage of grain and other foodstuffs, as a marketplace, and as a residence for local leaders and trades-people. The Eddisbury hillfort is believed to have been constructed in the early iron age, around two and a half thousand years ago, but may date back even further to the late bronze age. A third prehistoric site at Seven Lows (off Stable Lane) provides evidence of settlement from the early bronze age, over three and a half thousand years ago. A fire destroyed the main gateway at Eddisbury Hill in about 200BC, but the site continued to be occupied until after the Romans had arrived.

The most noticeable legacy from the Romans can be seen in the three main roads that run through or alongside the parish. The A54 follows the Roman road from Chester to Middlewich, while the A49 follows the road between the smaller Roman towns at Warrington and Nantwich. The road from Chester to the forts in Northwich and Manchester followed much the same route as the present A556, but taking a different line across Eddisbury Hill, alongside the footpath from the Yeld to Stoney Lane, across Station Road at the foot of Eddisbury Hill, and on to Cuddington and Sandiway via Thieves Moss (named after highwaymen lurking in the forest when the road became a turnpike in the eighteenth century).

After the Romans had gone the area was contested between Mercians (from the south), Northumbrians, Welsh and invading Danes, until Alfred the Great won control for the Mercians and drove the Danes back into Yorkshire. Alfred’s daughter Ethelfleda refortified Eddisbury Hill in 914 AD as part of the defence of Chester. This helped to keep the peace until the Normans arrived.

The Domesday Book (the Normans’ survey of their new conquests) identified Eddisbury as a land for six ploughs, measuring a league in length (about a mile and a half) and the same in width. William the Conqueror assigned the whole of the Forest de la Mara (Delamere) and the adjoining Forest of Mondrem to Hugh d’Avranches (whose father had contributed sixty ships to the invasion fleet), appointing him as the first Earl of Chester.

The Norman Forest of Mara extended all the way to the River Mersey in the north, to the River Weaver in the east, to the River Gowy in the west, and to the Weaverham to Tarporley road in the south (roughly where the A49 is now). The Forest of Mondrem extended from the other side of this road almost to Nantwich. 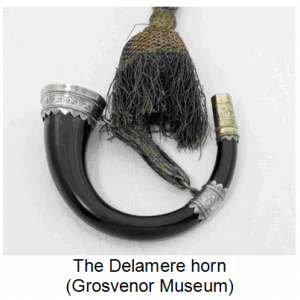 Earl Hugh adopted the twin forests as a hunting ground for deer and wild boar. An enclosure was created for fattening the deer, the Pale, to become the Old Pale when a second enclosure was created near Manley (the New Pale). After the earldom lapsed in 1237 the forest rights passed to the Crown, since which time the title Earl of Chester has been given to the heir to the throne (along with the title Prince of Wales since 1301). A royal hunting lodge (‘the Chamber in the Forest’) was built within the Eddisbury hillfort, probably on Merrick’s Hill. A silver hunting horn (the Delamere Horn) was used by the Chief Forester whenever the Earl of Chester was in the forest for the chase. The original sixteenth-century horn is on display in the Chester Grosvenor Museum.

When Vale Royal Abbey was founded by Edward I in 1270, the abbots were granted extensive rights to take timber and stone from the forest. The old sandstone quarries at Delamere Grove and Eddisbury Hill Park are thought to have provided stone for the abbey. The abbots converted much of the land to agriculture, so by the time the abbey was dissolved by Henry VIII in 1538, most of the woodland in Mondrem had been cleared. By the middle of the next century much of Mara had been cleared as well, and the deer were killed off during the Civil War.

At the beginning of the nineteenth century the forest was essentially heath land, but a large part of it was reforested during the Napoleonic Wars to supply oak for building ships for the Royal Navy. Through the 1812 ‘Act of Enclosure for Delamere Forest’ the Crown set aside half the land for the production of timber, and sold the other half to raise funds. This had a major influence on the subsequent development of the parish as a scattered rural community. The extensive remaining woodland is now managed by the Forestry Commission, mainly as a recreational resource.

The new parish needed a new church, and St Peter’s was completed in 1817. The Methodist church was not built until a century later, in 1913.

The new parish also needed a school, and the Crown donated an acre of forest land to build one. Delamere Church of England primary school was opened ‘for the education of the children of the poor’ in 1846. It is one of the few historic buildings in the parish (along with the church), being built of local red sandstone rather than the short-lived timber construction that was common in the area. The only other complete buildings that have survived from the early nineteenth century are the two toll houses that were built on the Chester to Manchester turnpike road, the Old Toll House and Kelsall Lodge (on opposite sides of the road near Gresty’s Waste).

The turnpike road was the main transport link for the village until the railway arrived. Delamere station was opened for goods in 1869, with a goods yard and sidings in what is now a car park. A passenger service was introduced in the following year, and seasonal excursions were run for tourists from Birkenhead. This marked the beginning of what the parish is today, a rural retreat attracting visitors from far and wide, with spectacular views across the Cheshire plain that reflect the parish’s long history.