Delamere Parish was Founded in 1812 for the townships of Delamere, Eddisbury, Kingswood and Oakmere which were previously extra-parochial areas of Delamere Forest.

St Peter’s Church, Delamere was built in 1817 to a design by James Gunnery and is said to be one of the Waterloo churches built to commemorate the famous victory two years earlier. It is made of local Manley sandstone with a Welsh slate roof and was altered greatly in 1878. The East window, by Kemp and Tower, was added in 1906 and the vestry in 1915.

The church is located is in an isolated position to the south of the villages, on the main Chester to Manchester road, some distance from any other building in what was then part of the forest.

More recently St Peter’s Church has been designated by English Heritage as a Grade II listed building. It is an active Anglican parish church in the diocese of Chester, the archdeaconry of Chester and the deanery of Middlewich.

Following the retirement of Revd. Elaine Ollman the church has a new Rector, Revd. Angela Askwith.   Revd. Askwith currently lives in Norley but will be moving into the rectory as soon as circumstances allow.  She can be contacted at 01928 787655 or stpetersdelamere@yahoo.com. 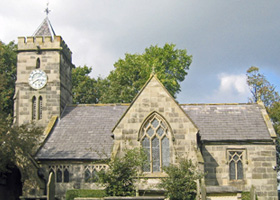 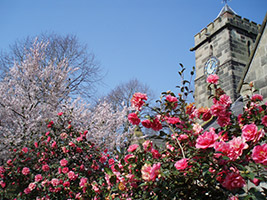